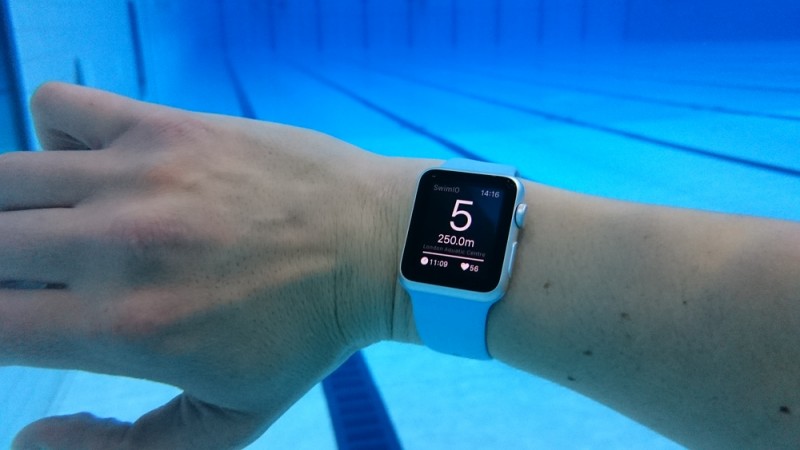 In the days and weeks after its launch last April, one of the biggest curiosities surrounding the Apple Watch was its tolerance to water. Thanks to a few initial tests — from showers to high dive pools — we now know that the Apple Watch is indeed a bit more waterproof than Apple promises, and with that in mind a few London-based iOS developers have created the “World’s first swim app on the Apple Watch,” and put it through its paces in a new video. 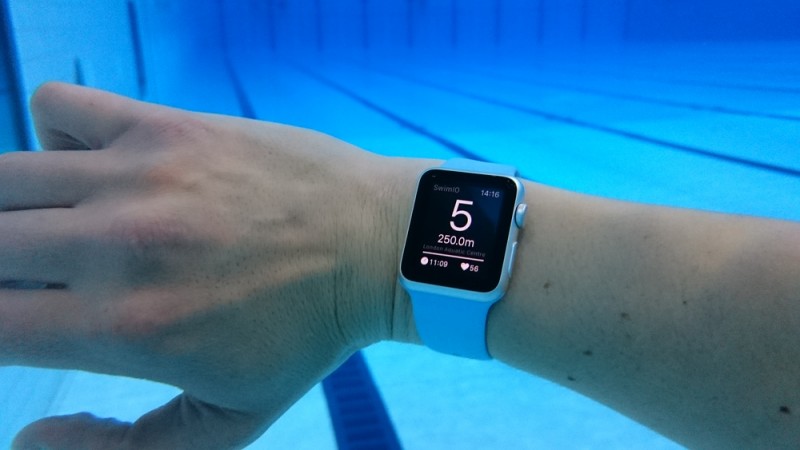 Having designed a similar app for the Pebble, Ted Bradley and his team decided to take that idea — a lapping, time, and heart rate monitoring swim app — and transplant it onto the Apple Watch. The developers put each smartwatch to the same test, swimming four full lengths of the London Aquatic Centre’s 50 meter pool. The test proved successful, with the Apple Watch mirroring the Pebble’s results of a four lap, 200 meter swim. Apple’s smartwatch even continued to measure heart rate successfully, raising from an initial 88bpm to 138bpm immediately after the test finished.

The only downside for the app is that the Apple Watch experiences a tiny bit of lag when waking it up to check out lap times, the developers explaining that only when the screen is awake can the app run through the data samples collected from the swim and take a few seconds to parse through the information and display it on screen. Elsewhere, the swimming data isn’t locked into the app, all of the workout and heart rate information getting delivered to HealthKit like any other workout and adding to a user’s daily exercise and move goals.

Of course, even though the app works, the developers are still referring to it as an “interesting technology demo,” seeing that App Store Guidelines will immediately shut it down for encouraging users to use the Watch “in a way that may cause damage to the device.” In the end, the app’s creators just hope that Apple hears the calls for a fully-waterproof smartwatch and includes such features in the device’s next generation.

We really hope that Apple see the demand for an official, fully waterproofed Apple Watch. Once that is available, we’ll be able to ship a fully featured swimming app. In the mean time, it would be great to see swimming become a first class citizen in the Apple Health and Activities apps. Running and cycling both have their own distance graphs you can view in the dashboard whilst for swimming you have to drill down to individual workouts.

Although you can’t swim with the Apple Watch, many people swim with other devices as well as logging their swim workouts manually on other apps. If there is a future ambition for Apple Health/HealthKit, Apple Watch, the new Activity app and ResearchKit to all tie up and tell the narrative that “Apple user’s live longer healthier lives”, then recording all fitness activity, including swimming, is a must.

The full blog post, where Bradley goes into detail about everything from his inspiration for creating the swim app to architectural challenges the team faced in creating it, is definitely worth a read.