'Workflow' for Apple Watch Brings Automated Tasks to Your Wrist

For those of you unfamiliar with Workflow, it’s a powerful automation app that was first launched on iOS last December. Workflow lets users create actions and connect apps to automatically perform a huge range of tasks on the iPad or the iPhone.

On the Apple Watch, Workflow will work in the same way, giving users one-tap access to a wide range of different timesaving actions. For example, it’ll be possible to pull up a map to the nearest coffee shop or call an Uber using Workflow. These type of quick-access actions may be particularly valuable on the Apple Watch, given its limited input methods.

One of the best features about Workflow for iOS is its included Workflow Gallery, which makes it easy for even those new to the app to download actions that are immediately useful. The same gallery feature will be available on the Apple Watch for fast access to workflows. 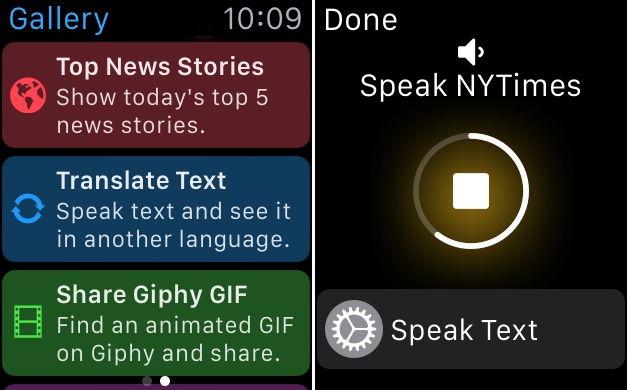 Workflow’s Gallery and a workflow in action
Workflows can be executed by raising the Apple Watch on the wrist to turn it on and swiping up at the bottom of the screen to get to the Workflow Glance. Workflows can be run directly from the Glance portion of the Apple Watch, so accessing them will be similar to accessing an app in the Notification Center on iOS. As a reminder, Glances are quick snippets of information that are meant to be easy to access.

Third-party Glances on the Apple Watch are not interactive and do not support buttons or scrolling, so launching a workflow through the Apple Watch’s Glance view is done in a unique way. The Glance automatically scrolls through the different workflows that are available and selecting one is done by tapping on the screen.

Scrolling through workflows can be sped up with a rather unique interaction — knocking the Apple Watch against the iPhone in a pants pocket. This causes the built-in scrolling mechanism to shift to the next available workflow in the list.

Workflows from the iPhone are automatically available on the Apple Watch, including all custom-created workflows constructed from the available actions in the Workflow app. Many Apple Watch apps are somewhat limited in function due to the restricted access developers have to Apple APIs, and the same goes for Workflow.

Apple Watch workflows aren’t as full-featured as those on the iPhone — it’s not possible to run workflows that open other apps — but Handoff is supported to allow users to transfer a workflow on the Apple Watch to the iPhone. 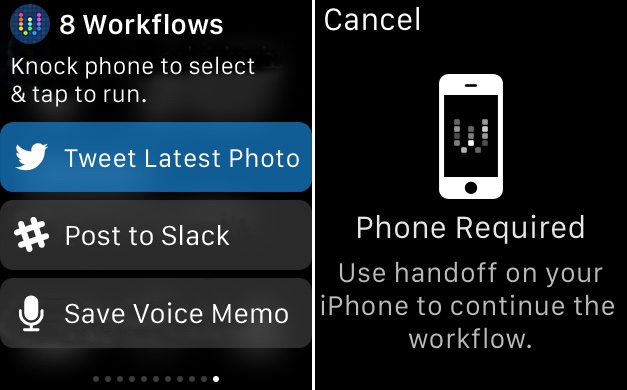 Workflow’s Glance menu and Handoff messageWorkflows that involve opening apps, sending messages, or placing phone calls will all require the iPhone because developers cannot use these functions. Workflows that are not supported on the Apple Watch will direct users to use Handoff to swap over to the iPhone.

Though Apple Watch workflows can’t open apps (aside from getting directions within Maps) they can still take advantage of the same data available to many iOS apps, like calendar info, contacts, Twitter, Facebook, and more. Currently, 163 out of 226 of available actions within the Workflow app are able to run natively on the Apple Watch, so there’s still quite a lot that can be done directly on the device.

Workflow for the Apple Watch is available through an update to the Workflow app as of today, so it’ll be accessible on the Apple Watch as soon as the first devices arrive in customers’ hands.

Workflow can be downloaded from the App Store for the sale price of $2.99. [Direct Link]