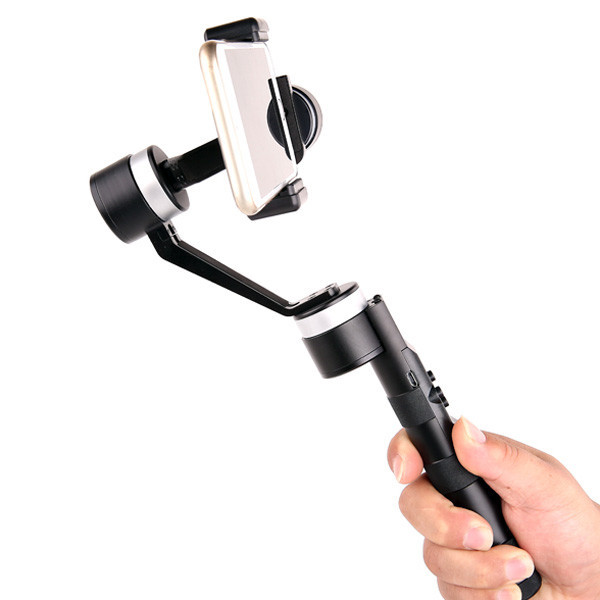 We’ve got another batch of fine new gadgets that play nice with your iPhone, iPad, and Mac.

Everything we’ve rounded up is a very new release, and includes stuff like speakers, cases, photography aides, and anything else that enhances your Apple experience. We’re always eager to hear what you’ve been checking out lately, so be sure to sing out in the comments! For those that are super-serious about shooting video with their iPhone, there’s a new three-axis motorized gimbal system that makes sure your shots are particularly smooth. Phones up to 3.5 inches wide can be mounted with minimal fuss. A handful of shooting modes allow the system to follow where you’re pointing smoothly, or stay locked in orientation. The on-device buttons also allow you to tweak orientation to make sure your iPhone is level before shooting. iOS and Android devices can take advantage of a remote shutter button to start and stop filming from the handle. The iPhone 6 will need to use an included counterbalance, but on the whole, this looks leagues easier to use than traditional mobile gimbal systems, such as the Smoothee. BRAVEN announced a new waterproof Bluetooth speaker just in time for the peak summer season here in the northern hemisphere. You can crank out a whooping 18 hours of wireless music and charge your iPhone with the built-in 4000 mAh battery. There’s a microphone on there so you can take calls as well. A variety of bright colors offer plenty of style choice to boot. Snag one of these if you figure you’ll be spending some time on the beach this summer. Preorders have begun for the Olympus Air A01, a camera body with a 16 megapixel sensor that can beam RAW photos wirelessly to your iPhone. It accepts any standard micro four-thirds lenses, so your existing collection of glass can be put to good use. A companion app helps you frame your shots, add filters, tweak brightness, contrast, and other settings, backup your photos to the cloud, and share them out to whoever you like. For those that aren’t quite satisfied with the pictures taken on their iPhone alone, the Olympus A01 may fit the bill. Sound Blaster has a new feature-packed speaker that can handle just about anything you toss at it. You can stream your tunes to the Sound Blaster FRee over one of two simultaneous Bluetooth connections. You’ll find an SD card slot on the back to play music locally. There’s also USB functionality if you want to play sound directly from your Mac, which can be tweaked and enhanced with a dedicated software suite. Both upright and horizontal orientations ensure it will fit into whatever your set-up may be. Between the 10 hours of playback, extra-loud, 360-degree audio, and water resistance, this speaker is built to handle life on the move.

OtterBox has expanded their Symmetry lineup of cases for the iPhone 6 and Samsung Galaxy S6 with metallic finishes. The darker of the two simulates a carbon fiber look, while the “Slate Gridlock” finish adds a brighter shine. A variety of other subtle and eye-catching colors are still available, and the cases maintain the same reliable two-level protection that OtterBox is known for. Snag one of these if you need some extra protection while doing outdoorsy stuff this summer.

We’re eager to hear your feedback for this weekly series, so shout out in the comments and let us know about what kind of tech you’re interested in hearing about.