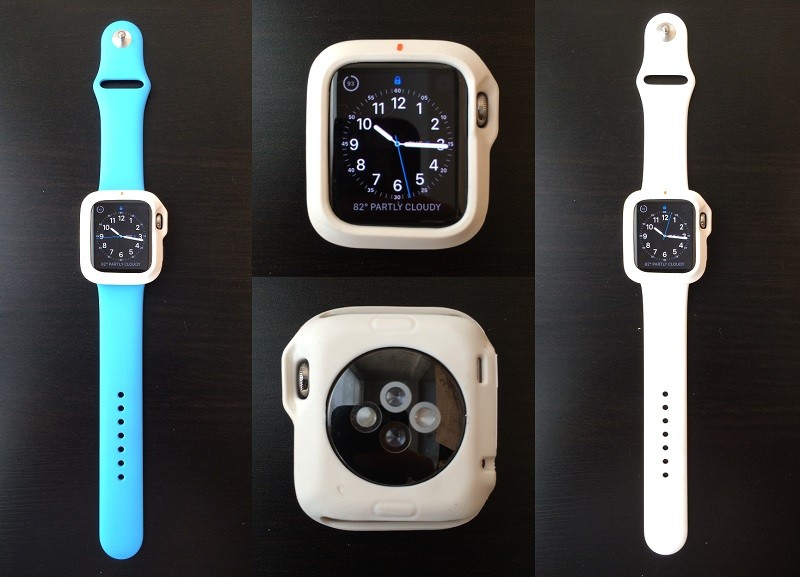 While charging stands of various designs have proven to be popular accessories for Apple Watch users, a perhaps lesser known category of accessories revolves around protecting the Apple Watch while wearing it.

One of these accessories is Actionproof’s “The Bumper,” a tight-fitting silicone sleeve that promises to protect your new Apple wearable from all the trips and spills made in everyday life. The Bumper may also provide some protection in extreme environments, with the bumper itself offering high resistance to UV radiation, ozone, outdoor exposure, extreme cold (minimum -40°C) and hot (maximum 120°C) temperatures, and basic chemical and abrasion combatants.

The good thing about The Bumper is that it does what it sets out to do. When placed safely around the 42mm Apple Watch case, The Bumper doesn’t move or jostle throughout the day. It’s a perfect fit for the wearable, with cutouts for the Digital Crown, microphone, speaker, and heart rate sensor. One of the only protective cases to cover the Digital Crown, The Bumper does so with a bracketed slice of silicone that bisects over the Crown, leaving an open space for your finger to manipulate and scroll the knob regardless of which wrist and orientation the watch is worn on. 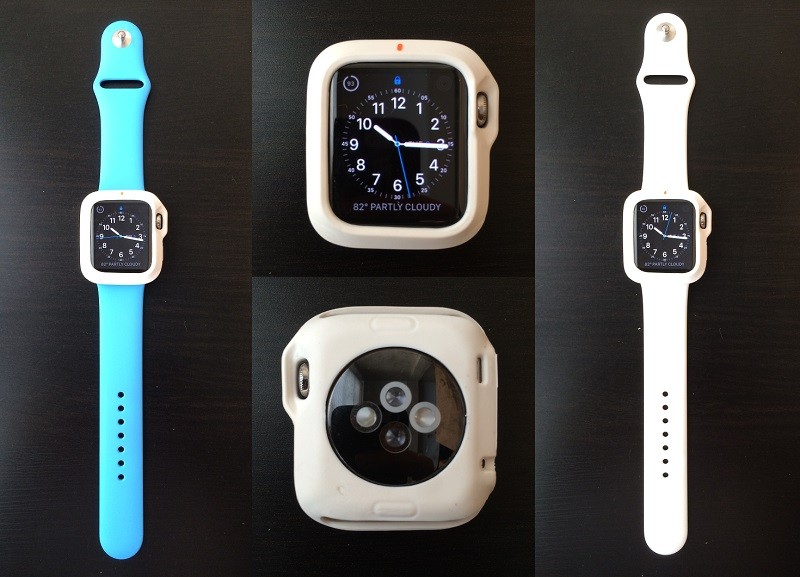 The small piece covering the Digital Crown makes it so pressing on the button is still manageable, though not quite as easy as without The Bumper. And although a few phone conversations had over the Watch with The Bumper went smoothly, I felt my Apple Watch needed a closer positioning to my face than usual to both hear the conversation and provide ample speaking volume for the person to whom I was speaking. They, on the other hand, remarked no noticeable dip in quality or volume throughout the call.

Although I was wary to put my own personal Apple Watch through any sort of strenuous drop testing, a few drops from waist height to a hardwood floor supported The Bumper’s basic shock-absorbing claims. It should also be noted that The Bumper does not directly protect the Apple Watch screen, though a slight raised indention on the front of the case will allow the Watch to be placed on its face without coming into contact with a surface, and should in general lessen the risk of direct damage to the sapphire crystal or Ion-X glass display. 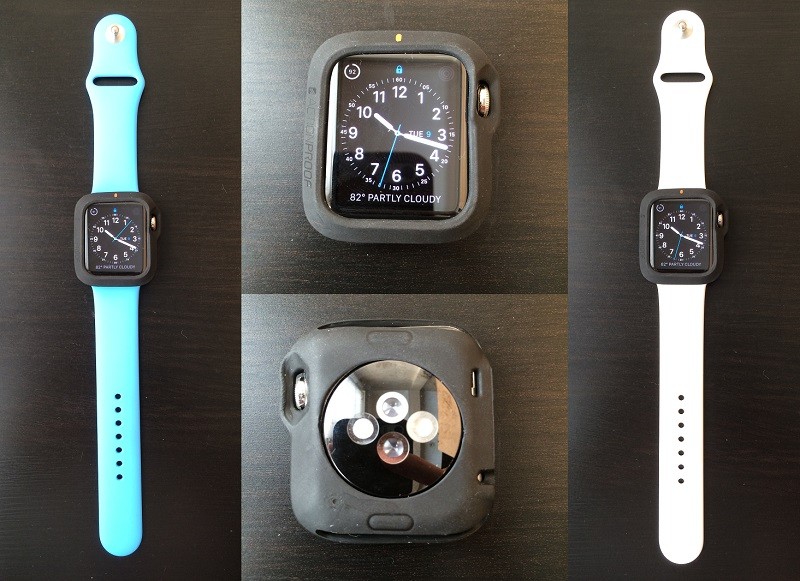 To test some of Actionproof’s more heavy-use claims, I worked out with The Bumper a few times to see how the silicone case felt on my wrist compared to the basic Apple Watch sans case. The Bumper itself was largely undetectable when moving around over long periods of time, but I did notice my Watch sliding more freely around my wrist due to the combination of increased sweat and a heavier, top-heavy Apple Watch thanks to the rubberized case.

Otherwise, the case didn’t interfere with any basic functions of the Apple Watch in a workout session. The heart rate sensor measured my heart beat constantly throughout both traditional resistance exercises and a few 3-mile outdoor and indoor runs. Although it felt like the Watch moved a bit more frequently on my wrist due to the extra bulk, the results of the handful of workouts didn’t seem to show any spurious gains in steps counted or calories burned. As a result, anyone interested in the extra padding of The Bumper can rest assured that it doesn’t interrupt any of the basic activity monitoring abilities of the Apple Watch. 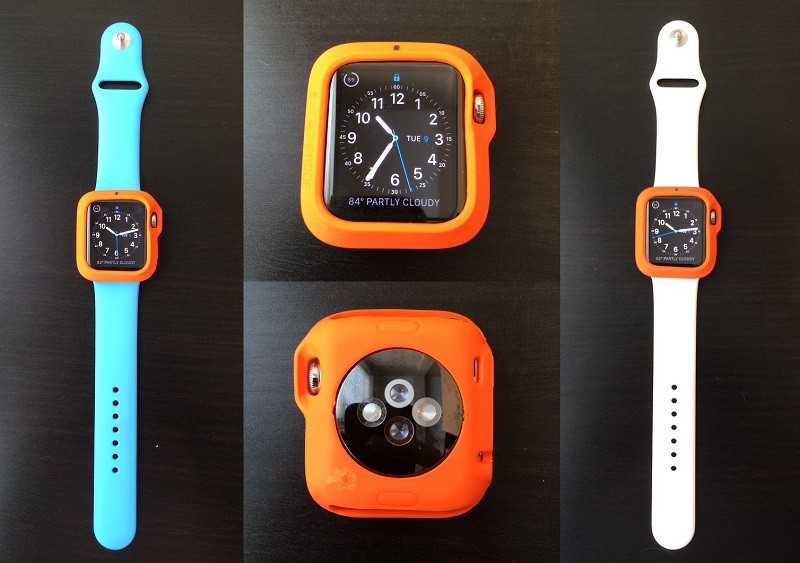 Unfortunately, where The Bumper starts to lose ground to the ease-of-mind bonuses it provides in basic protection is in small, less obvious moments you may not think of throughout the day. For example, thanks to the slight increase in both width and height, I found getting dressed with my Apple Watch on noticeably more cumbersome, with both short-sleeve and long-sleeve shirts snagging on The Bumper’s rubberized outer coating.

The basic installation of the case can be a tricky task, as well, thanks to the Apple Watch’s small size. Even with The Bumper only available for the larger 42mm Apple Watch, the process of wrapping The Bumper around your Apple Watch will require more direct hand and fingernail contact to the wearable than some may be comfortable with. Although that’s countered by the fact that The Bumper ultimately offers more protection in once installed, some users may not find that the case’s positives outweigh its negatives to risk the process in the first place. 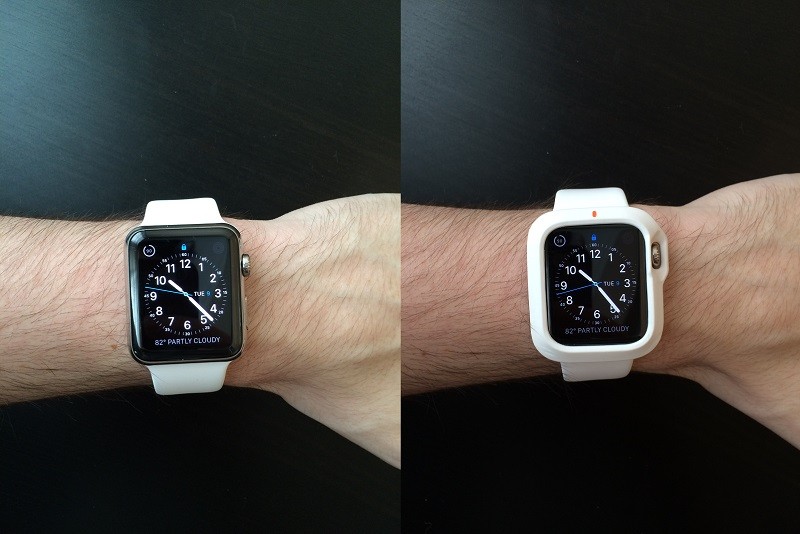 Another cause for concern is in the band removal process when The Bumper is placed on the Watch. The back of the case has two small nubs representing the Apple Watch’s band removal buttons, two interactive toggles that are small to begin with and that The Bumper’s added layer of silicone does nothing to alleviate. More than a few times I feared that the required pressure needed to push down on the silicone casing and activate the lock buttons would somehow harm my Watch. It never did, of course, but compared with the mostly slick and painless process of traditional band removal, it was a noticeable step backward.

Of course, maybe the biggest caveat in using Actionproof’s The Bumper is the most obvious: some may see it as a bit unsightly, and go against the clean aesthetic that Apple is aiming for with its wearable. Hiding your Apple Watch’s stainless steel or aluminum finish, The Bumper makes the Apple Watch stand out for its bulk but not necessarily easily recognizable to a layperson as an Apple Watch, which could be either a positive or negative depending on the user. The case, especially the black, adds significant visual width to the Apple Watch, which began to look overly large on my normal-sized wrist (I use the M/L sport band at the second-to-most tight setting). 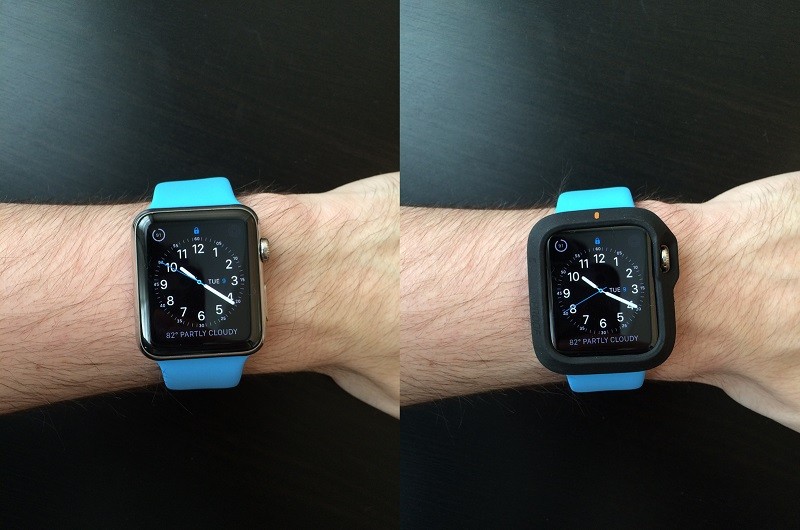 Actionproof only sells The Bumper in three colors – black, white, and orange – so not every sport band will have an accompanying color to blend in with, and in my experience the best combo of the case and band has been white-on-white. With only a white and blue sport band to my name, I can’t speak to The Bumper’s visual appeal with any of the higher-end Watch bands, but seeing as Actionproof is branding The Bumper with a sports-like edge on its website, it’s probably not a product meant to be worn with the Milanese Loop or Link Bracelet in the first place.

In the end, The Bumper’s usefulness in protection versus added bulk will vary drastically from person to person, as any traditional case does with smartphones. It provides solid protection to the Apple Watch, but at a cost of some of the new device’s good looks and seamless features, some may not be willing to make those tradeoffs. 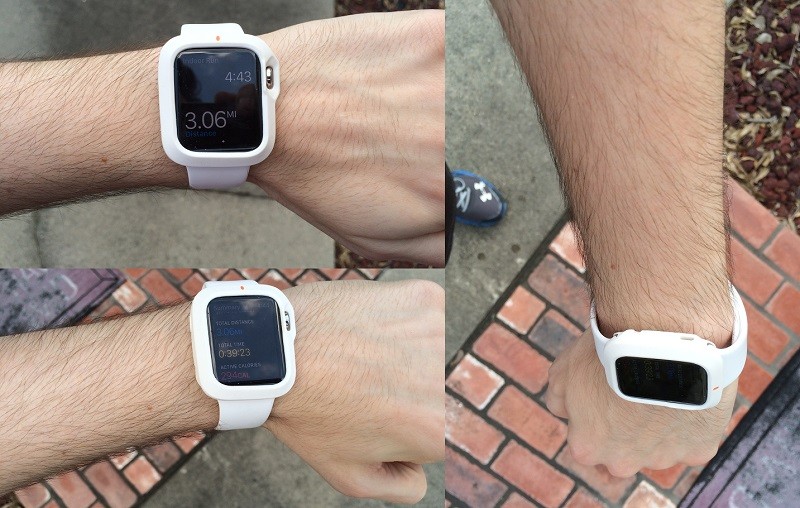 If you work in a more intense, outdoor environment or partake in high-intensity sports, The Bumper’s $35 price tag and slight bulk are likely tiny inconveniences to pay for ease-of-mind. For those people, given the nascent market of Apple Watch protective cases, The Bumper is a solid option. But those more concerned in showing off the nice looks of the Apple Watch and Apple Watch Sport — and less concerned about small spills and bumps their device may take along the way — probably won’t find much use in Actionproof’s protective rubber case.

The Bumper, which is only available for the 42mm Apple Watch, can be pre-ordered from the Actionproof website for $35 with a current shipping estimate of June 30.