We believe the lower purchase intent reflects a wait and see approach to the Watch as it seems unclear what will be the “killer app” for the Watch. We expect teens to be a good market for the Apple Watch given the popularity of the iPhone, but believe it will take time for influencers (celebrities) to make the watch popular among teens.

Though teens don’t yet seem to be interested in the Apple Watch, the iPhone and the iPad remain the most popular smartphone and tablet among teenagers. 66 percent of teenagers surveyed owned an iPhone, down slightly from 67 percent in the fall survey, while 64 percent owned an iPad, compared to 66 percent in fall of 2014. 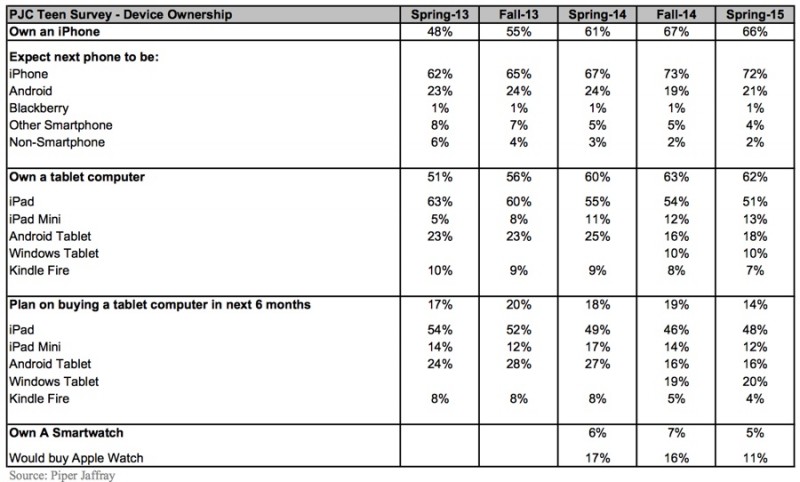 Over the last couple of weeks, the Apple Watch has been popping up on the wrists of celebrities like Pharell Williams, Katy Perry, and Drake, as Apple attempts to boost its popularity ahead of the device’s April 24 launch. Celebrity endorsements like these along with heavy marketing may lure teens towards the Apple Watch in the coming weeks.

The next teen survey will be published in October, and by that time, it’s possible the Apple Watch numbers will shift dramatically if Apple’s marketing tactics are successful.

Previous Samsung Galaxy S6 teardown reveals difficult repairability
Next This week's sidebar poll: How is your new phone treating you?