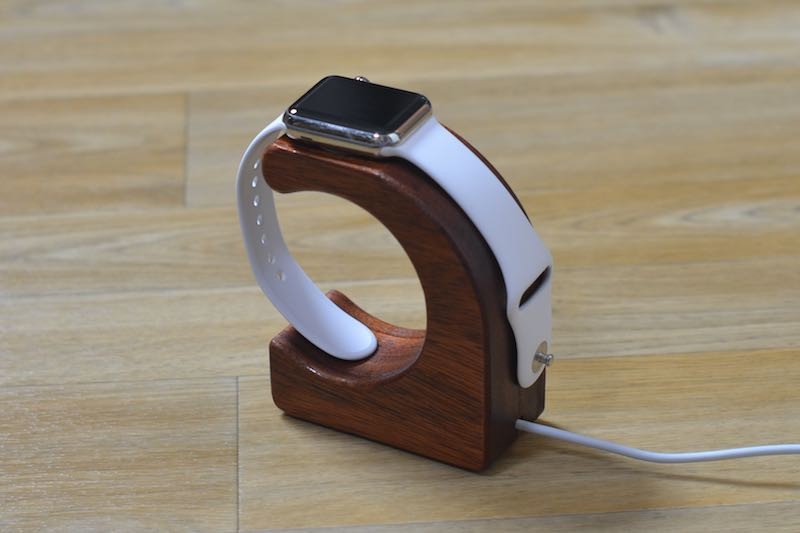 Most of the Apple Watch stands and docks that we’ve reviewed so far have been from major manufacturers, but the Wave Apple Watch Charging Stand from SchuttenWorks is made by a small team in Oregon. Available in several different woods, the Wave is named for its shape, which resembles the crest of a breaking ocean wave.

Visually clean and simple, the Wave uses a clever split design and magnet system to hide away the Apple Watch cable and lock the charger in place. It’s more expensive than most Apple Watch stands at $75, but it’s also arguably more elegant and certainly an aesthetic that some Apple Watch owners will love. 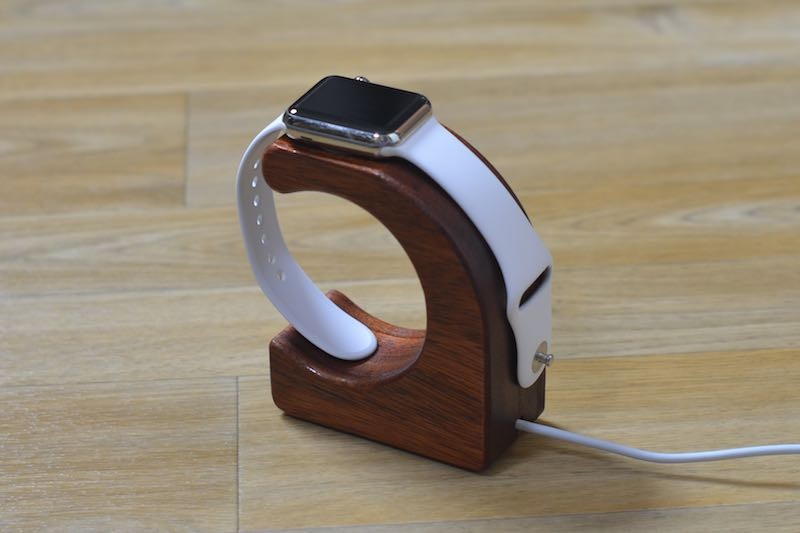 The Wave comes in two pieces, which snap together with a series of magnets and wooden pegs. Each side has cutouts for the Apple Watch charger and cable, which is routed through the middle of the stand and out the back. Setup is super simple — just pull the two pieces apart, nestle the charger at the top, snap the cable in place, and put the two pieces back together again. 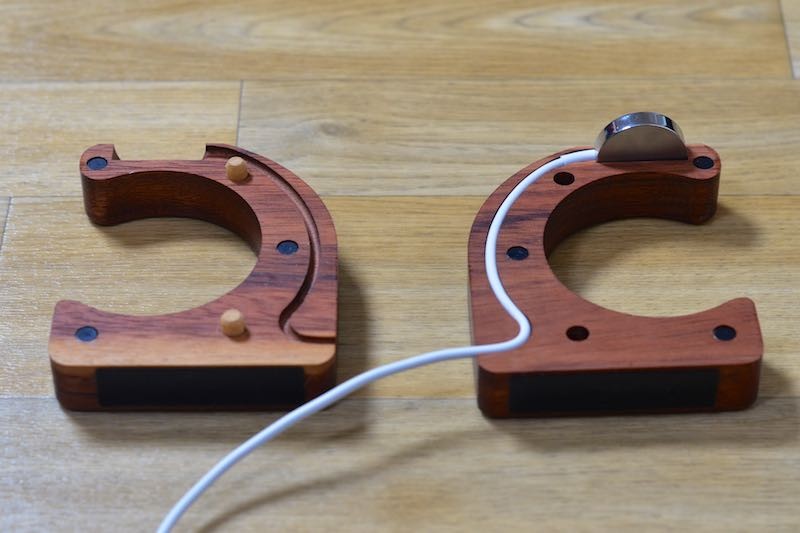 All of the cutouts in the wood are perfect and the two pieces of the Wave are flush with almost no visible seam. Snapped together, it looks like a single piece of wood that was designed around the charger. At the top, the Apple Watch charger is held in place with micro suction tape, but even without the tape, the fit is tight enough that it the cable would stay firmly in place. 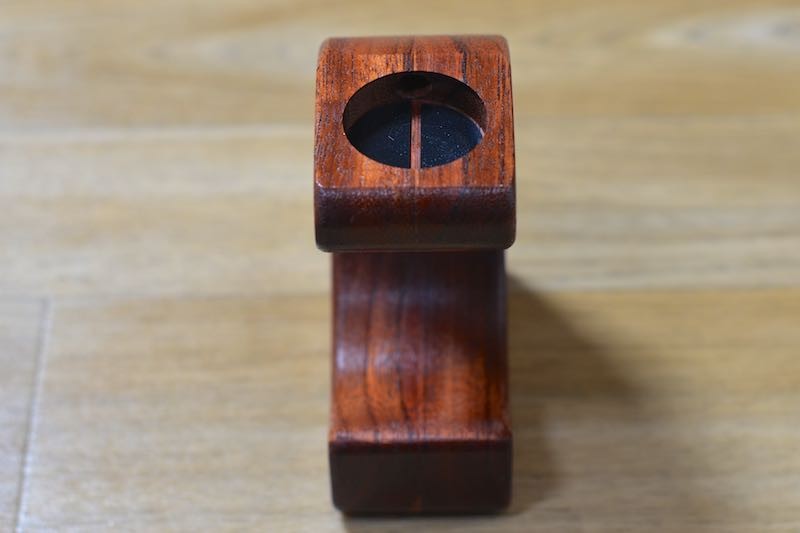 The stainless steel Apple Watch charger (which I have) is nearly level with the edges of the Wave, so the Apple Watch always gets a secure fit. There’s no rubber padding here like there is with some other watch stands, but the wood isn’t likely to cause damage to the bottom of the watch. 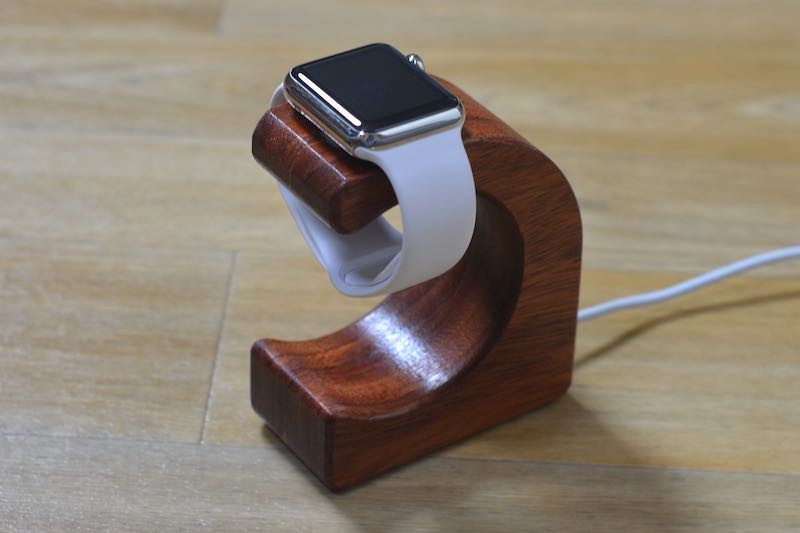 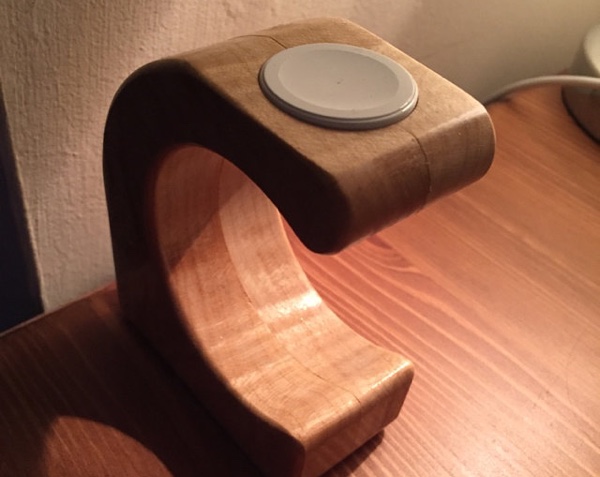 Image via an Etsy reviewer
A lot of Apple Watch stands have large bases to keep them stable, but the Wave is able to use a smaller footprint because it has two additional strips of micro suction tape on the bottom. This tape adheres firmly to any flat surface where the Wave is placed, keeping it from moving. It sticks so well to surfaces that I was worried it might damage my desk, but I’ve been using it for nearly two weeks now and I haven’t had problems. 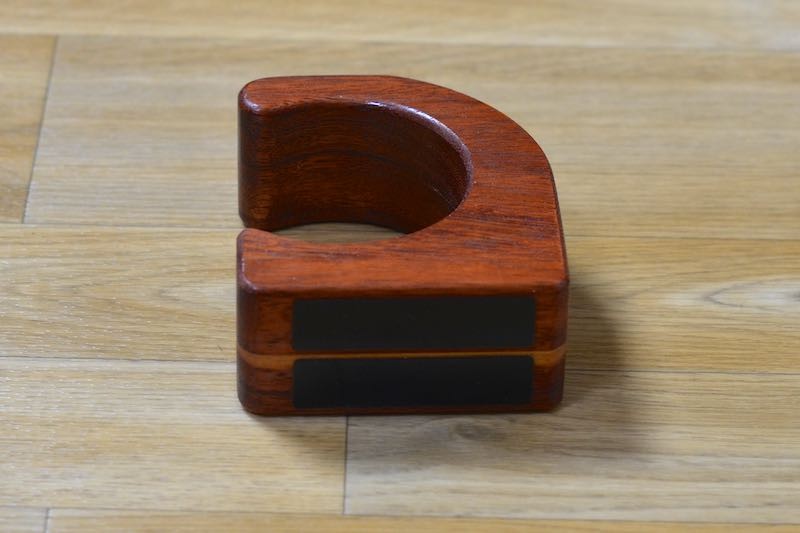 Compared to other Apple Watch stands, the Wave takes up a lot less space on my desk, which I appreciate, and it’s versatile. The Apple Watch fits on the Wave in any position, closed or open band. With a closed-loop band like the Milanese, or with a Sport Band snapped closed, the Apple Watch sits sideways on the stand. This is the position most of us will use once watchOS 2 is released, for the new Nightstand Mode. With the band open, the Apple Watch drapes over the Wave. 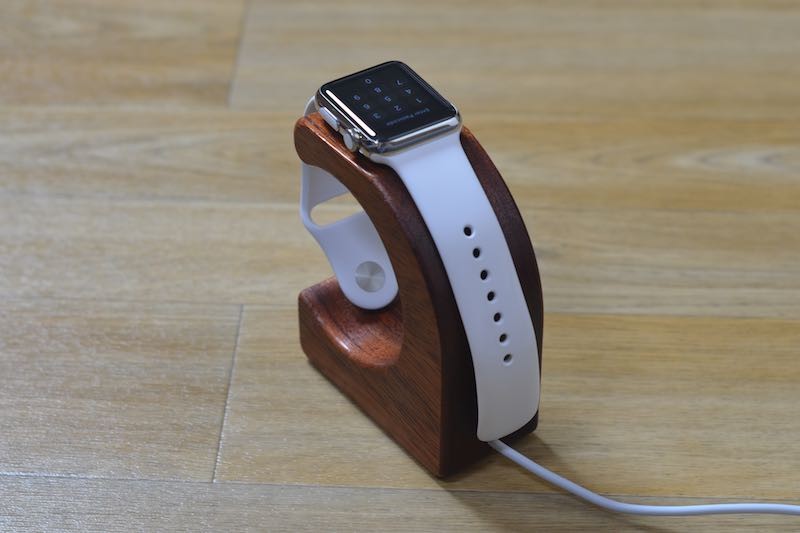 My only concern regarding the Wave is its angle. Stands from manufacturers like Griffin and Twelve South are angled slightly so the Apple Watch screen can be viewed easily on a nightstand with a quick glance, but the Wave is flat, which means it’s going to be harder to see the watch’s display at night. That might not be a big deal for some people, but it may be a limiting factor for those who use the Apple Watch to check the time in the night. 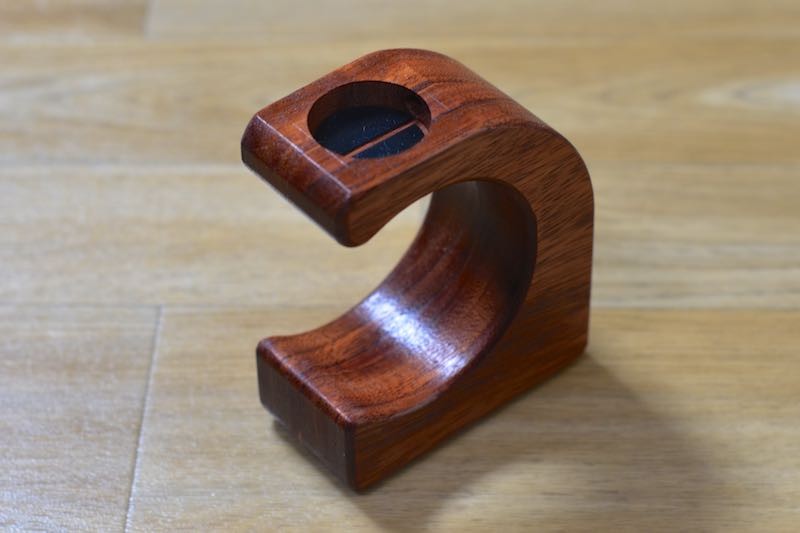 The Wave stand in the pictures is made from monkey wood, but stands are also available in lighter and darker woods, like cherry, curly maple, mahogany, oregon walnut, and plain walnut. There’s also a pitch black, which is, as the name suggests, a solid black color. 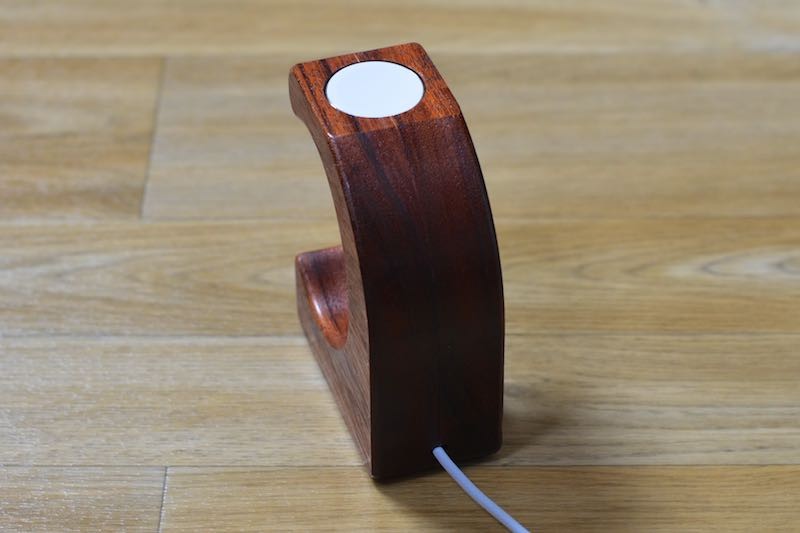 Wave creator Rindert Schutten told me that Wave stands are manufactured in small batches, with the sanding and polishing done by hand. “Each stand gets individualized attention which allows for in-process quality control,” he said. The ultimate goal with the Wave, according to Schutten, was to come up with a solution that would hide the cable, allow the charger to be installed easily, support all Apple Watches and bands, and offer one-handed docking and undocking.

With its relatively high price tag, the Wave isn’t going to appeal to everyone, but there are a lot of people out there who appreciate carefully crafted wood accessories and are willing to pay a bit more for them. The Wave has a clean, simple look that’s going to match most decor, from bedroom to office, and it’s a nice, compact size. 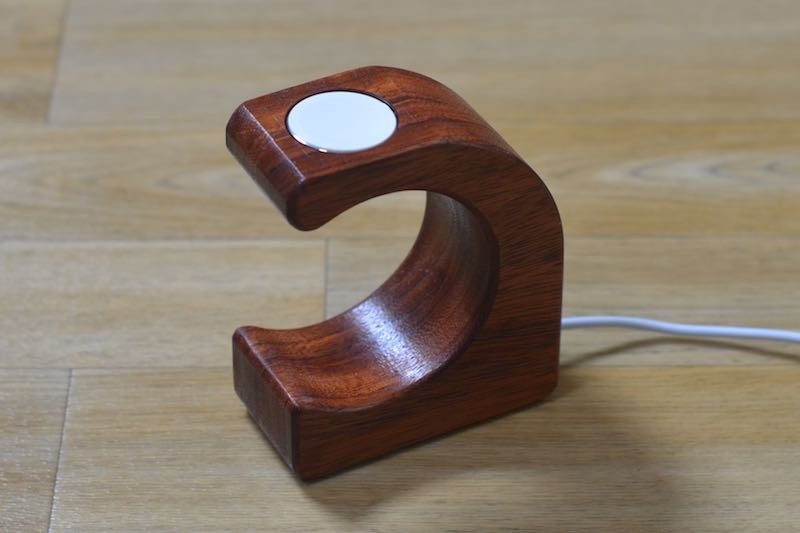 If you like the wood aesthetic and the juxtaposition of the high-tech Apple Watch next to a classic wood stand, the Wave is a solid choice.

The Wave Apple Watch stand can be purchased from the Shuttenworks website for $75.

Previous BlackBerry App Roundup for June 19, 2015
Next Star Wars: Battlefront hands-on preview: The Force is strong with this one