Disney today announced the launch of its own GIF app, called Disney GIF, that will act as a keyboard extension and allow users to share a huge back catalogue of Disney- and Pixar-themed GIFs in Message, email, and various social networks (via TechCrunch). With today’s launch, the app includes over 200 GIFs, with the company promising more to be added as time goes by.

GIFs ready at launch include moments from films like Frozen, The Lion King, and the newly-released Pixar feature Inside Out. The app will also feature content from studios owned under the Disney corporate umbrella, with GIFs from movies like Star Wars and even ABC shows like Scandal and Once Upon a Time. 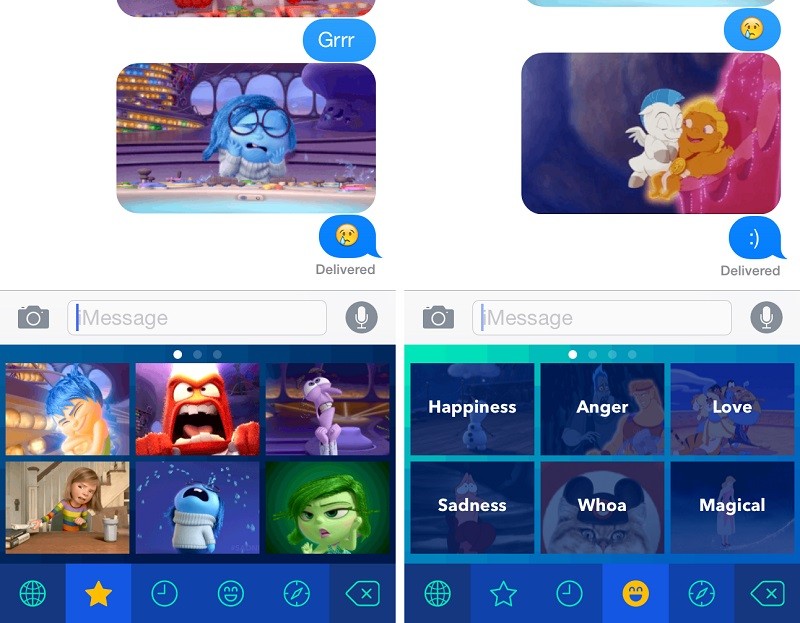 Perhaps taking a cue from the emotion-based Inside Out, the app lets users browse by emotional status, film, or see what’s currently trending with users around the world. Although the app is free to download, anyone interested in more premium content from the popular film Frozen can put down $0.99 for one of two themed packs from the animated musical.

The move is an interesting one, especially considering the rejection of app developer Matt Cheetham’s app GIF Finder earlier in the year, due to the fact that it “includes content or features that resemble various well-known, third-party marks, including Disney characters.” Although the app’s rejection was “largely due” to other entertainment properties, Disney’s desire to be included in the meme- and GIF-generating world, and still own complete control over the output, makes the debut of Disney GIF more understandable.

Disney GIF can be downloaded from the App Store for free. [Direct Link]