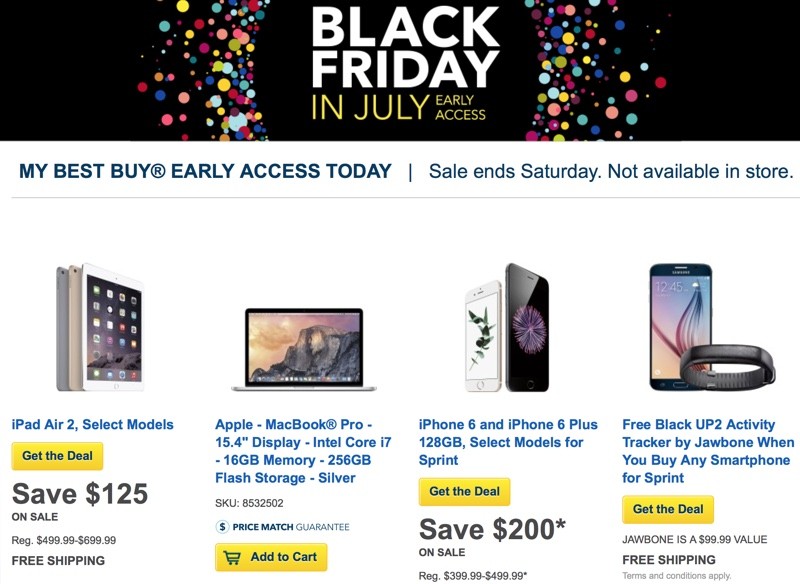 Best Buy is offering a “Black Friday in July” promotion this weekend, which will see the company offering significant discounts on many products. One of the major deals included in the promo is a price cut on iPads, dropping the price on the iPad Air 2 to the lowest we’ve seen since the tablet launched last October. 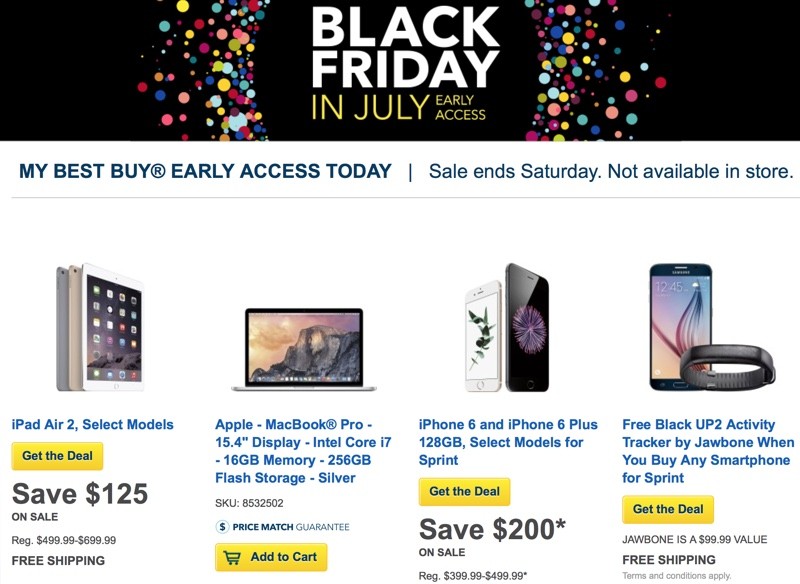 Best Buy’s Black Friday discount is scheduled to begin on July 24 and last through July 25, but customers who sign up for a Best Buy account can get early access to the deals beginning today. Signing up for an account is a free process, but does require a phone number and an email address.

In addition to offering a discount on the iPad Air 2, Best Buy also has several other Apple-related deals worth checking out. The 2.2GHz 15-inch Retina MacBook Pro with 16GB of memory and a 256GB SSD is available for $1,749.99, a discount of $250.

128GB iPhone 6 and iPhone 6 Plus models from Sprint are available at a $100 discount with a two-year contract, dropping the price on the devices to $299.99 instead of $399.99. There’s also a deal for a free Jawbone UP2 Activity Tracker with the purchase of any smartphone from Sprint.

Unrelated to its Black Friday promo, Best Buy is also offering discounts on the 128GB Wi-Fi only iPad mini 3, dropping the price by $150 on both the Silver and Space Gray models. With the discount, the tablet is available for $449.99 instead of $599.99.

These deals, particularly the discount on the iPad Air 2, are likely to go quickly, so MacRumors readers hoping to get an iPad at a discount might want to purchase today. Deals are online only today, but will be available in store on Friday and Saturday.

Note: MacRumors is an affiliate partner with Best Buy.