The first video, on Phone Calls, walks users through how phone calls work on the Apple Watch. It displays options for answering incoming calls and making outgoing calls. There are several options when receiving a phone call — it can be muted by covering the Apple Watch with a hand or a response message can be sent by scrolling up with the digital crown. Making a call can be done through the “Friends” button on the side, or through Siri. 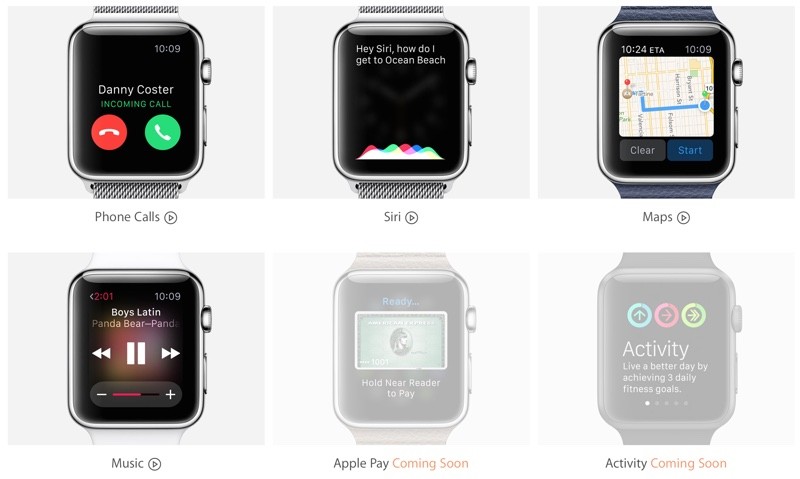 Apple’s Siri Apple Watch video covers how to use Siri on the Apple Watch. Siri can be accessed by holding down on the digital crown and the digital assistant can do things like setting alarms, opening apps, getting directions, and more, as on the iPhone. In the “Music” video, Apple walks through available controls in the Music app on the Apple Watch, demonstrating how to control music on the iPhone using the device.

A playlist can be transferred to the Apple Watch by placing the device on its charger, going to the Apple Watch app on the iPhone, and choosing “Sync Playlist.” Music can be played from the Apple Watch directly through a paired device by using a force tap within the Music app to select a source and a destination. As we’ve previously learned, Apple Watch has 8GB of storage, with 2GB of that available for storing music.

Apple still has three additional videos that have yet to be uploaded to the page, including “Apple Pay,” “Activity,” and “Fitness.” We’ll likely see those added to the site next week, ahead of the device’s April 24 ship date.

The Apple Watch can be pre-ordered from the Apple online store, with prices that start at $349. Apple Watch demand has been high, so orders placed today will not ship out until June and beyond, depending on model.