Apple has published a support document on its website confirming that it has been using a fleet of vehicles to collect street-level imagery for Apple Maps. Apple outlines that it will blur faces and license plates on images, as Google Maps does for Street View, and lists where Apple Maps vehicles will be driving in the United States, England and Ireland between June 15 to June 30.

“Apple is driving vehicles around the world to collect data which will be used to improve Apple Maps. Some of this data will be published in future Apple Maps updates. We are committed to protecting your privacy while collecting this data. For example, we will blur faces and license plates on collected images prior to publication.”

Apple has been driving around fifth-generation Dodge Caravans equipped with LiDAR camera equipment on the roof to collect street-level imagery in the United States, starting with major cities and metropolitan areas in the south, northeast and midwest regions of the country. The mapping vehicles have been spotted in at least a dozen states to date as they continue moving further inland.

Apple Map vehicle collecting street-level imagery in New Jersey in May 2015
MacRumors has been tracking Apple Maps vehicles in the United States for the past several months, with the first sightings occurring in New York City in August 2014. Since then, using verified photos with GPS metadata, we have confirmed Apple Maps vehicle sightings in Atlanta, Chicago, Dallas, Los Angeles, Phoenix, San Francisco and many other areas. Many of those locations are listed below. 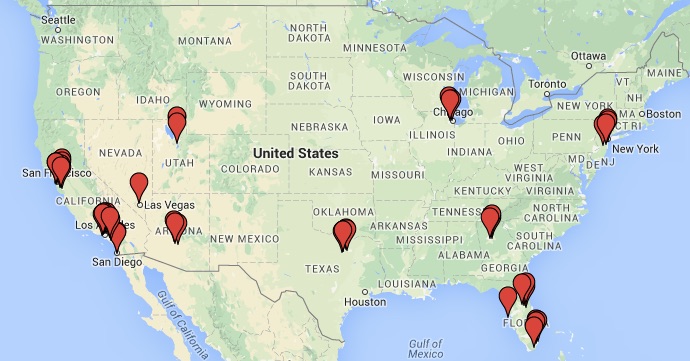 Click on the map for an interactive view of Apple Maps vehicle sightings in the U.S.