Apple today launched a newly updated Siri website, which gives a comprehensive look at the voice assistant built into the company’s iOS devices. The site opens with a quick overview of what Siri can do, and then provides users with a list of categories featuring Siri’s different abilities: At a Glance, Staying in Touch, Getting Organized, Sports, Entertainment, Out and About, Getting Answers, and Tips and Tricks.

Talk to Siri as you would to a friend and it can help you get things done — like sending messages, placing calls, or making dinner reservations. You can ask Siri to show you the Orion constellation or to flip a coin. Siri works hands-free, so you can ask it to show you the best route home and what your ETA is while driving. And it’s connected to the world, working with Wikipedia, Yelp, Rotten Tomatoes, Shazam, and other online services to get you even more answers. The more you use Siri, the more you’ll realize how great it is. And just how much it can do for you.

Each category offers a look at the different commands that Siri can work with. “At a Glance” gives a quick rundown of a random assortment of questions that can be asked, like “When is the sunset in Paris?” and “What movies are playing today?” while other categories offer a more specific selection of available commands.

“Getting Organized,” for example,” includes commands specific to apps like Calendar and Reminders, such as “What does the rest of my day look like?” and “Remember to pick up dry cleaning next Friday.” “Entertainment” includes commands like “Show me the trailer for Boyhood” and “Buy the latest season of Homeland.”

Each of the pages offers a look at features many iOS users might not have known Siri was capable of, and they’re organized in a compelling grid-like view that’s easy to read and outfitted with pictures for visual appeal. 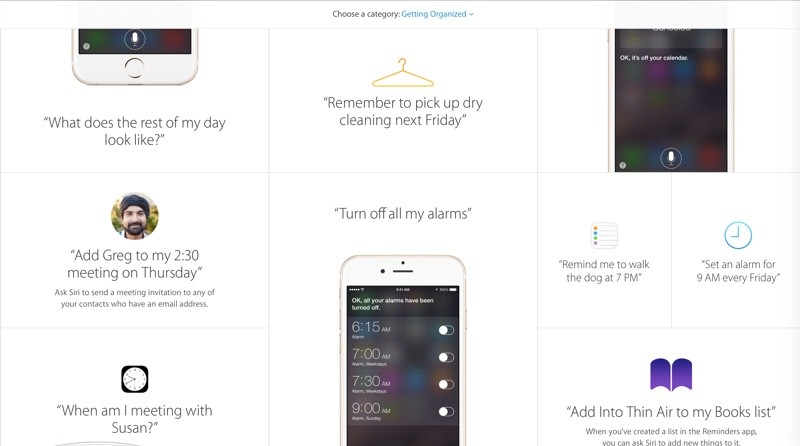 Apple previously had a site that offered information on Siri, but it was just a single page that offered more of an overview of what Siri can do rather than something more specific that drilled down into actual commands. The new Siri site offers a much deeper look at Siri’s abilities.

Previous HTC committed to OS updates for the HTC One for Windows
Next Sprint's Wi-Fi calling now supported on select iPhone models with iOS 8.3