Apple will report its financial results later this hour for the second quarter of the 2015 fiscal year, a three-month period spanning January through March that directly followed the holiday shopping season. Apple has offered guidance of between $52 billion and $55 billion in quarterly revenue, while the average of all analysts combined forecasts the company’s revenue during the quarter marginally higher at $56.84 billion.

Philip Elmer-DeWitt at Fortune has compiled a pair of charts that aggregate all predictions by independent and professional analysts for Apple’s revenue, EPS, gross margin and number of iPhones, iPads and Macs sold during Q2 2015, and it’s believed that Apple will report double-digit growth year-over-year as sales remain strong and the company’s momentum continues in 2015. 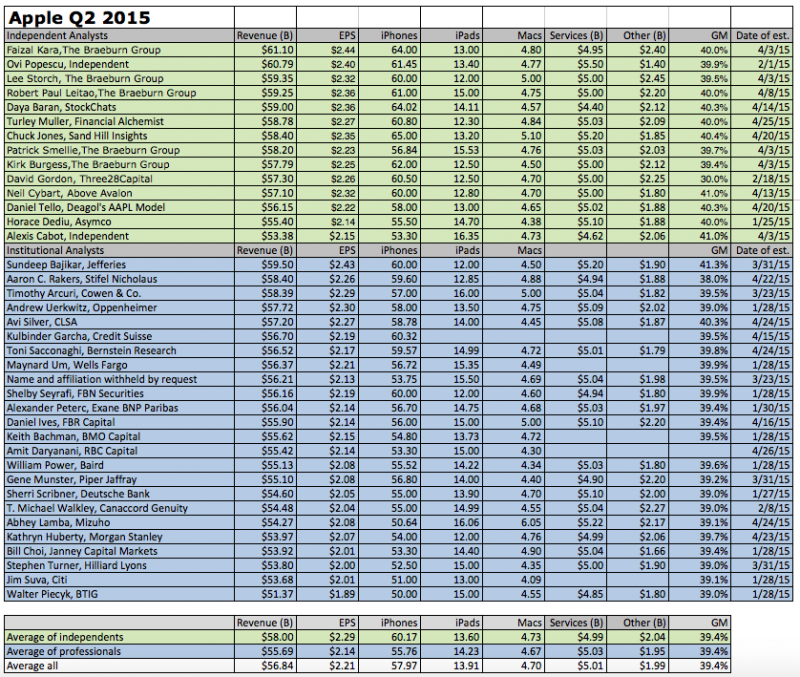 MacRumors will be providing live coverage of Apple’s financial results as they are reported around 1:30 PM Pacific (4:30 PM Eastern), including the subsequent earnings conference call with CEO Tim Cook and CFO Luca Maestri at 2 PM Pacific (5 PM Eastern). At that time, we’ll have a clearer picture of just how well Apple managed to perform in the quarter.