Even amid a decline in U.S. PC shipments, Apple continues to see steady shipment growth, according to new PC shipping estimates from Gartner. Apple shipped nearly 1.7 million PCs in 1Q15, up from 1.5 million in 1Q14, marking an 8.9 percent increase. Overall PC growth in the United States in 1Q15 was down 1.3 percent compared to 1Q14, with Dell and other smaller manufacturers seeing a decline in shipments. Gartner estimated total PC shipments in the U.S. during 1Q15 at 13.9 million, down from 14 million last year.

During the quarter, Apple captured 12 percent of the market, up from 10.9 percent in the year ago quarter. Apple is positioned as the third largest PC vendor in the United States, and continues to trail both HP and Dell when it comes to market share. 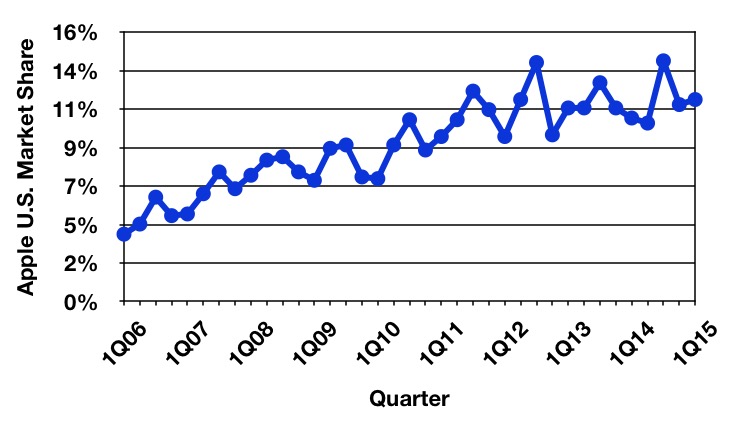 Apple’s U.S. Market Share Trend: 1Q06-1Q15 (Gartner)
IDC also released its shipment estimates today, and as is typical, its numbers are different than Gartner’s numbers, in part because Gartner counts Windows-based tablets as personal computers, while IDC does not. According to IDC, overall PC shipments in the United States for 1Q15 were at 14 million, with Apple responsible for shipping 1.6 million PCs during the quarter, up from 1.5 million in 1Q14. IDC estimates Apple saw 1.7 percent growth with 10.9 percent market share.

IDC also ranks HP and Dell as the top two vendors in the United States, but its estimates place Lenovo as the third largest vendor with Apple coming in fourth and Toshiba coming in fifth.